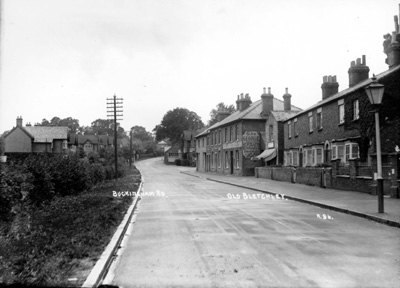 Glass negatives and prints of towns and villages in north Buckinghamshire and beyond. This collection has been digitised and is available to view online here: https://www.mkcdc.org.uk/kitchener/

Maurice Kitchener was born in Olney on the 23rd September 1894. His father Joe was a shoe finisher and before the First World War, Kitchener was also employed in the shoe-making trade. During the First World War, Kitchener enlisted with the Royal Flying Corp and served with 92nd Siege Battery, Royal Garrison Artillery at the Somme.   After the war, Kitchener married Annie Randall and returned to Olney, where the couple had two sons, Basil and David, and Maurice re-joined the shoe trade. By 1921, he was working as a photographer in Chesham and by 1931 he had his own photographic studio in Newport Pagnell. Between 1925 and 1936, Kitchener would travel around the countryside of north Buckinghamshire, mostly by bicycle, and take pictures of the villages and towns to turn into picture postcards for commercial sale. He would cart around his large camera and heavy glass negative plates, with his tripod strapped to his cross bar.   Unfortunately Kitchener’s wife Annie suffered from severe rheumatoid arthritis and passed away in 1945. Kitchener went on to marry Elsie Field in 1950 and the couple lived in Newport Pagnell for the rest of their lives. Elsie passed away in 1966 with Maurice following in 1969.