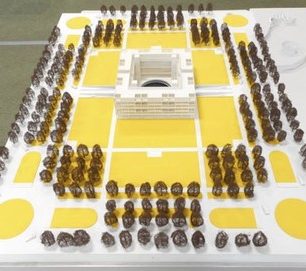 A 1:200 scale model of a housing development in Milton Keynes. The model contains a square, five storey block of flats in the centre, surrounded by open land (coloured yellow) on all sides. On two sides of the building tennis courts are marked out on this land. There is a small shelter in each corner of this land. Beyond this land there are roads on all four sides, with roundabouts in each corner. The roads have central reservations which have trees on them. There is extensive tree growth throughout the model.

The building has underground car parking, with two ramps descending from the roads on either side of the building. Model vehicles are shown using these ramps.

The building is raised on stilts, meaning the ground floor is undeveloped. The centre of the building is hollow, with the flats arranged around the edges of the square structure. They appear to be two storey maisonettes on the first/second, third/fourth floors while the top floor has one storey dwellings with roof terraces. Perspex covered walkways run along the inside of the structure, allowing access to the flats. There are lift shafts in all four corners. A circular water feature is on the ground floor, divided in two by a walkway.

There is extensive wiring underneath the model. This may have been for illumination of the building. There is no plug.

"Central Area Housing" referred to seven grid squares surrounding Central Milton Keynes: Bradwell Common, Conniburrow, Downs Barn, Oldbrook, Fishermead, Springfield and Downhead Park. The development shown in this model may have been intended for any of the above estates.